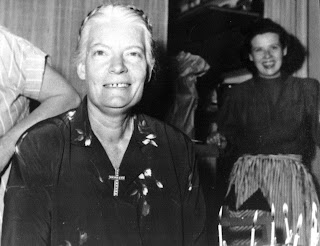 It's the birthday of Dorothy Day, founder of the Catholic Worker

"People say, 'What good can one person do? What is the sense of our

small effort?' They cannot see that we must lay one brick at a time.

We can be responsible only for the one action of the present moment.

vitalize and transform all our individual actions, and know that God

will take them and multiply them, as Jesus multiplied the loaves and

Attached Photo of Dorothy Day celebrating her birthday in in 1952

By WILLIAM MCCALL
THE ASSOCIATED PRESS

-- A federal judge in has ruled a law prohibiting material support for terrorists is unconstitutional because it is too vague.

U.S. District Judge Garr King said the Treasury Department violated the rights of the chapter of a defunct Islamic charity based in .

Treasury officials froze the assets of the Al-Haramain Islamic Foundation in after listing it as a "specially designated global terrorist organization."

King said the department violated the charity's due process rights by failing to provide it with any basis for the designation.

The judge also ruled the law on the provision of "material support" to any group given the designation was unconstitutionally vague.