Were you an activist in D.C. circa 1963-1975?/ US Soldiers Bringing Their Violence Home from Overseas

Mike Tabor is hoping to hold a gathering in D.C. to document ACTIVISM IN 1963 – 1975 OUR STORY.  Were you a participant?  Would you be interested in helping document some of this history?  Contact me, and I will get you in touch with Mike Tabor.

After Ten Years of War Sex Crimes, Domestic Abuse, and Suicide on the Rise for Soldiers

After more than ten years at war, soldiers in the US military are more prone to sexual violence, domestic abuse (including spousal and child abuse), and suicide, according to a report released by the Pentagon on Thursday. 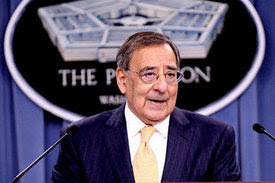 In this file photo, Defense Secretary Leon Panetta speaks at the Pentagon. The Pentagon is preparing a series of new initiatives to try to curb sexual assaults in the military, Panetta said Wednesday, calling the problem a stain on the honor of the armed forces. (Pablo Martinez Monsivais/AP) Reuters reports:

Violent sex crimes committed by active U.S. Army soldiers have almost doubled over the past five years, due in part to the trauma of war, according to an Army report released on Thursday.

Reported violent sex crimes increased by 90 percent over the five-year period from 2006 to 2011. There were 2,811 violent felonies in 2011, nearly half of which were violent felony sex crimes. Most were committed in the .

One violent sex crime was committed by a soldier every six hours and 40 minutes in 2011, the Army said, serving as the main driver for an overall increase in violent felony crimes.

The report acknowledges that post-traumatic stress syndrome (PTSD) and other scars from long or repeated deployments are clearly contributed factors to the resulting violence, as the Reuters' report indicates:

Soldiers suffering from issues such as Post-Traumatic Stress Disorder (PTSD), traumatic brain injury, and depression have been shown to have higher incidences of partner abuse, according to the report.

Soldiers with PTSD are up to three times more likely to be aggressive with their female partners than those without such trauma, the report said.

As the largest branch of the armed forces, the Army has done the bulk of the fighting in and , including years of extended duty and repeated deployments.

Stars & Stripes, the magazine for the US Armed Services, suggests that even as the wars wind down, the rate of violence at home likely may not:

One violent sex crime was committed by a soldier every six hours and 40 minutes in 2011, the Army said, serving as the main driver for an overall increase in violent felony crimes.

Though troops have left and an withdrawal is planned, the health and psychological problems will continue, and in some cases could even increase as veterans enter the civilian world, Army Vice Chief of Staff Gen. Peter Chiarelli said. The Army will stay on top of them, he promised.

And though unreported violence against other service members and family members means that few of the Pentagon numbers can be deemed accurate - a fact the Pentagon acknowledges - they do think some of the rising rates of reported violence have been impacted not only by increased stress, but also by increased openness in the military system. According to the Christian Science Monitor:

General Peter Chiarelli, the Vice Chief of Staff of the Army... said that one reason sex crimes figures may have increased “so dramatically” in the past five years is that troops feel more comfortable coming forward to report the crime.

The Army study indicates that the vast majority (97 percent) of perpetrators “at least casually” know their attacker. Both the victims and perpetrators of sex crimes tend to be among the youngest soldiers.

And the New York Times highlighted the continued rise in the suicide rate among soldiers, noting:

Suicides among active-duty soldiers hit another record high in 2011, Army officials said on Thursday, although there was a slight decrease if nonmobilized Reserve and National Guard troops were included in the calculation.

Posted by Max Obuszewski at 7:00 PM