10 reasons the U.S. is no longer the land of the free (Washington Post OUTLOOK)

10 reasons the is no longer

the land of the free 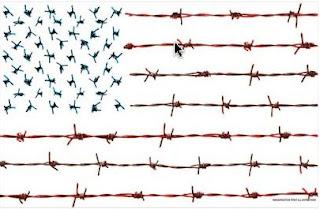 Every year, the State Department issues reports on individual rights in other countries, monitoring the passage of restrictive laws and regulations around the world. , for example, has been criticized for denying fair public trials and limiting privacy, while has been taken to task for undermining due process. Other countries have been condemned for the use of secret evidence and torture.

Even as we pass judgment on countries we consider unfree, Americans remain confident that any definition of a free nation must include their own — the land of free. Yet, the laws and practices of the land should shake that confidence. In the decade since Sept. 11, 2001, this country has comprehensively reduced civil liberties in the name of an expanded security state. The most recent example of this was the National Defense Authorization Act, signed Dec. 31, which allows for the indefinite detention of citizens. At what point does the reduction of individual rights in our country change how we define ourselves?

While each new national security power has embraced was controversial when enacted, they are often discussed in isolation. But they don’t operate in isolation. They form a mosaic of powers under which our country could be considered, at least in part, authoritarian. Americans often proclaim our nation as a symbol of freedom to the world while dismissing nations such as and as categorically unfree. Yet, objectively, we may be only half right. Those countries do lack basic individual rights such as due process, placing them outside any reasonable definition of “free,” but the United States now has much more in common with such regimes than anyone may like to admit.

These countries also have constitutions that purport to guarantee freedoms and rights. But their governments have broad discretion in denying those rights and few real avenues for challenges by citizens — precisely the problem with the new laws in this country.

The list of powers acquired by the government since 9/11 puts us in rather troubling company.

President Obama has claimed, as President George W. Bush did before him, the right to order the killing of any citizen considered a terrorist or an abettor of terrorism. Last year, he approved the killing of U.S. citizen Anwar al-Awlaqi and another citizen under this claimed inherent authority. Last month, administration officials affirmed that power, stating that the president can order the assassination of any citizen whom he considers allied with terrorists. (Nations such as , and have been routinely criticized for extrajudicial killings of enemies of the state.)

Under the law signed last month, terrorism suspects are to be held by the military; the president also has the authority to indefinitely detain citizens accused of terrorism. While the administration claims that this provision only codified existing law, experts widely contest this view, and the administration has opposed efforts to challenge such authority in federal courts. The government continues to claim the right to strip citizens of legal protections based on its sole discretion. ( recently codified a more limited detention law for its citizens, while countries such as have been singled out by the for “prolonged detention.”)

The president now decides whether a person will receive a trial in the federal courts or in a military tribunal, a system that has been ridiculed around the world for lacking basic due process protections. Bush claimed this authority in 2001, and Obama has continued the practice. ( and have been denounced for maintaining separate military justice systems for selected defendants, including civilians.)

The president may now order warrantless surveillance, including a new capability to force companies and organizations to turn over information on citizens’ finances, communications and associations. Bush acquired this sweeping power under the Patriot Act in 2001, and in 2011, Obama extended the power, including searches of everything from business documents to library records. The government can use “national security letters” to demand, without probable cause, that organizations turn over information on citizens — and order them not to reveal the disclosure to the affected party. ( and operate under laws that allow the government to engage in widespread discretionary surveillance.)

The government now routinely uses secret evidence to detain individuals and employs secret evidence in federal and military courts. It also forces the dismissal of cases against the by simply filing declarations that the cases would make the government reveal classified information that would harm national security — a claim made in a variety of privacy lawsuits and largely accepted by federal judges without question. Even legal opinions, cited as the basis for the government’s actions under the Bush and Obama administrations, have been classified. This allows the government to claim secret legal arguments to support secret proceedings using secret evidence. In addition, some cases never make it to court at all. The federal courts routinely deny constitutional challenges to policies and programs under a narrow definition of standing to bring a case.

The world clamored for prosecutions of those responsible for waterboarding terrorism suspects during the Bush administration, but the Obama administration said in 2009 that it would not allow CIA employees to be investigated or prosecuted for such actions. This gutted not just treaty obligations but the principles of international law. When courts in countries such as moved to investigate Bush officials for war crimes, the Obama administration reportedly urged foreign officials not to allow such cases to proceed, despite the fact that the has long claimed the same authority with regard to alleged war criminals in other countries. (Various nations have resisted investigations of officials accused of war crimes and torture. Some, such as and , eventually relented to comply with international law; countries that have denied independent investigations include , and .)

The government has increased its use of the secret , which has expanded its secret warrants to include individuals deemed to be aiding or abetting hostile foreign governments or organizations. In 2011, Obama renewed these powers, including allowing secret searches of individuals who are not part of an identifiable terrorist group. The administration has asserted the right to ignore congressional limits on such surveillance. ( places national security surveillance under the unchecked powers of the military or intelligence services.)

Like the Bush administration, the Obama administration has successfully pushed for immunity for companies that assist in warrantless surveillance of citizens, blocking the ability of citizens to challenge the violation of privacy. (Similarly, has maintained sweeping immunity claims both inside and outside the country and routinely blocks lawsuits against private companies.)

The Obama administration has successfully defended its claim that it can use GPS devices to monitor every move of targeted citizens without securing any court order or review. ( has installed massive public surveillance systems, while is notorious for active monitoring of selected citizens.)

The government now has the ability to transfer both citizens and noncitizens to another country under a system known as extraordinary rendition, which has been denounced as using other countries, such as , , and , to torture suspects. The Obama administration says it is not continuing the abuses of this practice under Bush, but it insists on the unfettered right to order such transfers — including the possible transfer of citizens.

These new laws have come with an infusion of money into an expanded security system on the state and federal levels, including more public surveillance cameras, tens of thousands of security personnel and a massive expansion of a terrorist-chasing bureaucracy.

Some politicians shrug and say these increased powers are merely a response to the times we live in. Thus, Sen. Lindsey Graham (R-S.C.) could declare in an interview last spring without objection that “free speech is a great idea, but we’re in a war.” Of course, terrorism will never “surrender” and end this particular “war.”

Other politicians rationalize that, while such powers may exist, it really comes down to how they are used. This is a common response by liberals who cannot bring themselves to denounce Obama as they did Bush. Sen. Carl Levin (D-Mich.), for instance, has insisted that Congress is not making any decision on indefinite detention: “That is a decision which we leave where it belongs — in the executive branch.”

And in a signing statement with the defense authorization bill, Obama said he does not intend to use the latest power to indefinitely imprison citizens. Yet, he still accepted the power as a sort of regretful autocrat.

An authoritarian nation is defined not just by the use of authoritarian powers, but by the ability to use them. If a president can take away your freedom or your life on his own authority, all rights become little more than a discretionary grant subject to executive will.

The framers lived under autocratic rule and understood this danger better than we do. James Madison famously warned that we needed a system that did not depend on the good intentions or motivations of our rulers: “If men were angels, no government would be necessary.”

Benjamin Franklin was more direct. In 1787, a Mrs. Powel confronted after the signing of the Constitution and asked, “Well, Doctor, what have we got — a republic or a monarchy?” His response was a bit chilling: “A republic, Madam, if you can keep it.”

Since 9/11, we have created the very government the framers feared: a government with sweeping and largely unchecked powers resting on the hope that they will be used wisely.

The indefinite-detention provision in the defense authorization bill seemed to many civil libertarians like a betrayal by Obama. While the president had promised to veto the law over that provision, Levin, a sponsor of the bill, disclosed on the Senate floor that it was in fact the White House that approved the removal of any exception for citizens from indefinite detention.

Dishonesty from politicians is nothing new for Americans. The real question is whether we are lying to ourselves when we call this country the land of the free.

Jonathan Turley is the Shapiro professor of public interest law at .

Posted by Max Obuszewski at 9:06 PM