Published on Friday, December 30, 2011 by CommonDreams.org

I believe that we are coming to a crossroads as a nation.

Since 9/11, we’ve been traveling down a road bristling with guns, military technology, paranoia and fear.  Though most of our aggressive energy has been aimed outside our borders, there has also been a steady preparation for mass violence within the as well.  In the decade since 9/11, our national police forces have been armed with military hardware, and have trained extensively in riot control, with the results that we saw for the first time during the recent Occupy protests. 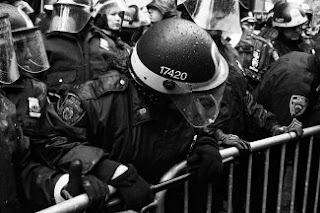 In the peaceful town of Fargo, North Dakota, report Andrew Becker and G.W. Schulz of the Center for Investigative Reporting, “Every city squad car is equipped today with a military-style assault rifle, and officers can don Kevlar helmets able to withstand incoming fire from battlefield-grade ammunition. And for that epic confrontation—if it ever occurs—officers can now summon a new $256,643 armored truck, complete with a rotating turret.”

Billions of federal tax dollars have been spent nationwide on this kind of military hardware for police, in the name of Homeland Security.

Security from what?  Security for whom?

Short of an all-out military invasion by a foreign force, which seems hugely unlikely, these weapons can only be meant to confront an insurgency within our own borders.

Are we thinking about a civil war, then?

Are these police being armed and trained to protect the interests of the 1% against the raging anger of the 99%?

A year ago it would not have occurred to me to ask these questions.  But obviously the Homeland Security crowd was already thinking ahead and planning for a time when such armor and weapons would be necessary to “maintain security” and “uphold law and order” on the home front.

Yes, they must have been aware, even as they were cashing in on our ignorance, that there would come a time when no more could be squeezed from the bottom two-thirds of American society.  When there would be so many homeless, so many poor, so many disenfranchised, that these people would feel they had no other recourse than violence, and nothing left to lose.

A new report by the  on Family Homelessness found that “more than 1.6 million children – or one in 45 children – are homeless annually in . This represents an increase of 38% during the years impacted by the economic recession.”

I’m sorry, but that is just unacceptable in this country, which likes to think of itself as the wealthiest and most enlightened society on earth.

When you add up all the trials and tribulations being visited on the poor in this country–and “the poor” is a vast category that gets bigger day by day–and you weigh billions in Homeland Security anti-terrorism outfits for police against dwindling food and shelter for children–well, something just isn’t right here.  There’s something rotten in the state of .

And yes, we are at a crossroads.

It may seem to some that I am over-reacting, but this is the way it feels to me: if we continue following along docilely on this daisy path that we’ve been led down by the architects of corporate capitalism, we are like the Jews of Germany in 1940, peacefully gathering our belongings and getting on that train to Auschwitz, or marching cooperatively out to the forest to be mowed down by machine guns into the mass grave.

We know enough now to know that the powers that be do not have our best interests at heart.

We’ve been sickened by their chemicals, and our health care system seems geared to treat sickness (at a profit) rather than to promote wellness.  Our oceans, air, soils and drinking water have been contaminated and rendered toxic. Our taxes have been used for guns and landmines instead of schools and social welfare.  Those who have gotten rich in this system have done so on the backs of the poor and those who cannot defend themselves: the natural world above all.

Are we going to continue down this path?

Or are we going to gather our courage at this crossroads, and strike off in a new direction?

A lot of people are asking this question now.  Over on the New Clear Vision blog, Charles Imboden suggests that the Occupy movement has ignited a renewed “commitment to direct democracy and shunning of ‘representative,’ republican forms of decision-making (so often susceptible to corruption and corporate influence) [which] can be further strengthened as the foundation of the egalitarian, ecological society.”

As one of my readers commented today, what would happen if they held an election and we just didn’t show up?

I don’t know if there is a way to cut ourselves loose from the federal government and its taxpayer-supported state terror apparatus.  Thoreau tried, back in the 19th century, and was promptly thrown in jail.

His letter from prison is worth re-reading today.

“Unjust laws exist: shall we be content to obey them, or shall we endeavor to amend them, and obey them until we have succeeded, or shall we transgress them at once? Men, generally, under such a government as this, think that they ought to wait until they have persuaded the majority to alter them. They think that, if they should resist, the remedy would be worse than the evil. But it is the fault of the government itself that the remedy is worse than the evil. It makes it worse. Why is it not more apt to anticipate and provide for reform? Why does it not cherish its wise minority?

“If the injustice is part of the necessary friction of the machine of government, let it go, let it go: perchance it will wear smooth—certainly the machine will wear out. If the injustice …is of such a nature that it requires you to be the agent of injustice to another, then I say, break the law. Let your life be a counter-friction to stop the machine. What I have to do is to see, at any rate, that I do not lend myself to the wrong which I condemn.”

Let your life be a counter-friction to stop the machine.

As we gear up for next year’s Presidential elections, we must take these wise words of Thoreau’s to heart.

But we must also be aware, as Thoreau certainly was, that there are other paths to take, outside of the machine.

We stand at a crossroads.  Each of us must make up our own minds, in our own time.

How much longer will we continue to docilely feed the machine our tax dollars, and march peacefully where they lead us?

Posted by Max Obuszewski at 9:04 PM