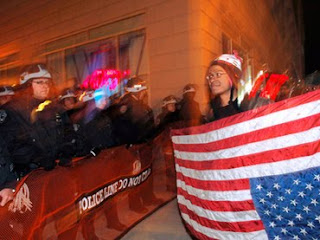 With demonstrators suspecting governmental assistance in the crackdowns clobbering Occupy Wall Street encampments, the CIA is trying to distance itself from divulging any incriminating evidence regarding their role in the raids.

The Partnership for Civil Justice (PCJF), a Washington DC-based civil rights group, filed a Freedom of Information Act request last month to see what role, if any, the CIA has had in the brutal raids of OWS encampments that have left thousands jailed and droves of demonstrators beaten, in some instances ending up in intensive care. Now after reviewing the request to publically release any information, the Agency is scoffing at the PCJF, who in turn is calling this “a classic case of CIA-double speak” used to hide its involvement.

Any CIA involvement in the crackdowns would break not just departmental code but national legislation. As a result, even if there was involvement, the Agency won’t investigate it because any leads could yield the revelation of (surprise!) wrongdoing within the CIA.

Specifically, Mara Verheyden-Hilliard, executive director of the PCJF, asked the agency to disclose “any documents or information pertaining to Federal coordination of, or advice or consultation regarding, the police response to the Occupy movement, protests or encampments.”

In their response, CIA Information and Privacy Coordinate Susan Viscuso tells the PCFJ that the mission of the CIA is “primarily concerned with foreign intelligence — not domestic — matters.” She goes to cite that National Security Act prohibits the Agency from policing or conducting domestic law enforcement, and therefore, their system is not configured as to allow the CIA to “search reasonably calculated to lead to responsive records.”

“Therefore,” writes Viscuso, “we must decline to process your request.”

"The CIA is apparently asserting that because its involvement in law enforcement's crackdown of the Occupy movement would be barred by law, it is not possible for the CIA to conduct an effective search for information responsive to our inquiry into its role in the operation," responds Verheyden-Hilliard. “In other words,” she continues, “because the actions would be illegal, they would also be off the books.”

That doesn’t mean, of course, that there was no involvement. Instead, rather, the CIA is refusing to dive into their seedy annals of creepiness to let the world know that they couldn’t break their own code of conduct.

Last month the website Truthout sent a FOIA request to the Department of Homeland Security regarding their own involvement, following up a request from October inquiring about any role the Federal Bureau of Investigation (FBI) had in the crackdown. On November, FBI FOIA Chief David Hardy said that, “based on the information [Truthout] provided, we conducted a search of the Central Records System” and “were unable to identify main file records responsive to the FOIA.” Truthout followed up the response by citing a 2009 study from George Washington University’s National Security Archive that revealed that the FBI gave a “no records” response to more half of the FOIA requests it received in 2008.

The Partnership for Civil Justice Fund says that they are asking the CIA to reconsider their request and has threatened legal action if they will not comply. Additionally, they have filed similar requests with the Department of Justice, Homeland Security Department, National Park Service and FBI.

Posted by Max Obuszewski at 1:01 PM